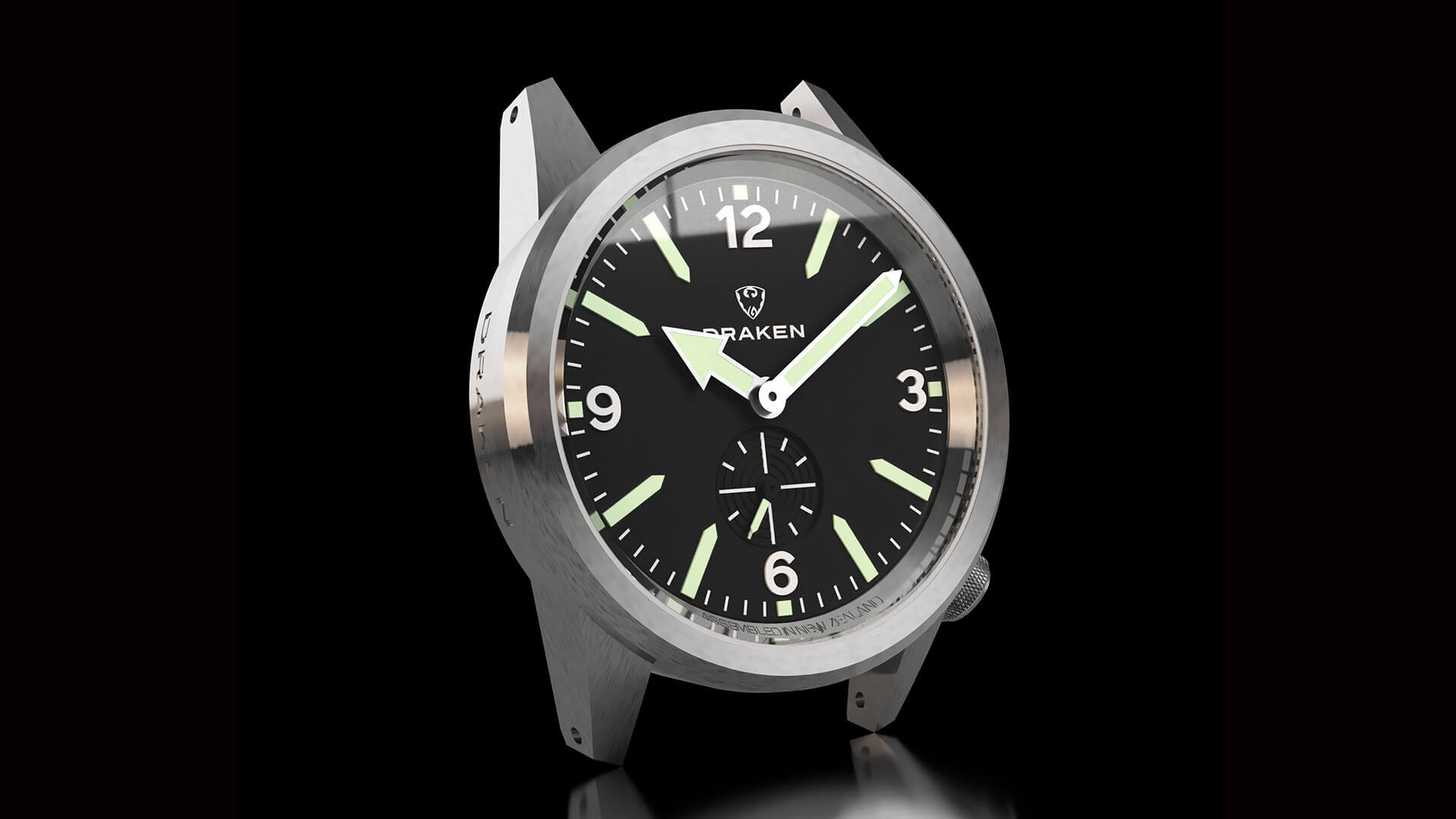 It’s time for an update on the next Draken: the Aoraki (“au-ra-kee”).

For a lot of you, this might actually be the first time you’ve heard about it.

Being a tool watch company, we’ve tended to produce watches in larger sizes. We’ve done dive watches, a pilot watch, a military-style watch and a chronograph, all of which have been between 42 and 44mm in diameter.

The one essential tool watch we have not done is a field watch. Historically, they have tended to be smaller diameter watches with a 3-hand layout.

In my mind, the three characteristics of a true field watch should be:

I am always grateful for the feedback we receive from customers. And a lot of Tugela and Kalahari customers have made requests for a smaller Draken. I hope the Aoraki will scratch that itch, and then some. It will retain the same design identity, the same level of ruggedness and QC while adding a more versatile option to your collection.

The size also allows us to connect more directly with our female fans. Their numbers pleasantly surprise me always, and if you are one of them, I look forward to your thoughts on the piece when it is launched.

The Aoraki – the Te Reo Māori name for Mount Cook, the tallest mountain in New Zealand – was the testing ground for Sir Edmund Hillary, the first person to climb Mount Everest.

As a South African expat, I have typically named our models with reference to some South African geographical feature, be it a river (Tugela), desert (Kalahari), ocean (Benguela) or reserve (Kruger).

Naming the Aoraki marks a milestone as my roots become more established here in New Zealand.

Just as importantly, this will be the first Draken watch assembled here in New Zealand. So it seemed only fitting that it should have a New Zealand name. To commemorate this achievement, the rehaut of the watch will have ‘ASSEMBLED IN NEW ZEALAND’ engraved on it.

The movement, of course, is why we all gravitate towards a mechanical piece in the first place.

I did consider the NH35A, a workhorse we have used before that is prolific on the micro brand scene.

With the Aoraki, the goal was to try something different on multiple fronts.

I really liked the history and story of the Dirty Dozen, which many of you will know were the WWII watches that served on the wrists of many British soldiers, My intention was to create a more modern interpretation of these, and this affected the movement I went with.

The Dirty Dozens stand out stylistically because of the small seconds at 6h, adding a bit more interest to the dial than you would see on a typical field watch, such as a Hamilton Khaki for example.

Though there are many Swiss manual winds out there that fit the design brief, they are not very affordable. Plus I really wanted a movement that was automatic, in line with our mantra of making reliable, low-maintenance pieces that won’t let you down in the field.

The Miyota 82S5 automatic ended up the winner, with its headline recent upgrades of hacking and hand-winding, the lack of which has been a bugbear for many collectors who have enjoyed its otherwise über-dependable tool watch worthy performance.

To accommodate for some of its eccentricities we made a couple of adjustments.

Take the small seconds subdial for example. Since it is positioned at an odd angle, we needed to rotate the movement to bring it to 6h.

It also comes default with an open-heart view of the hairspring and balance wheel, which of course has been covered up with the dial.

Other features of the 82S5:

As with our other models, the case of the Aoraki will feature our trademark tapered design. This also determined the dimensions of the watch.  I wanted it under 40mm in diameter, and eventually settled on 39mm knowing that it would wear more like a 38mm due to the tapered sides.

To make this a super user-friendly watch, I managed to add drilled lugs. Because we are rotating the movement to bring the small seconds to 6h, the crown would sit between the 4h and 5h position (39.04° from 3h). This is a bit of an awkward position for the crown, but we are confident that the size and knurling will help with making it easier to use.

In another first for Draken, the finishing on the case will be brushed. For the past 6 models, we have gone with fully bead-blasted cases. I love the tool-like aesthetic that bead blasting brings, but for the Aoraki, rather appropriately, I felt that it was time to explore a bit, opening up the style to a wider audience. I’m very curious to see how this finish shows up on the prototypes. If it doesn’t meet the requisite standards, we can go back to bead-blasting.

Yes, the side of the case will still have the DRAKEN engraving. Yes, I get that this puts a lot of people off because it makes them think of Invicta. The engraving is a design element that subtly breaks up the height of the watch, which is very geometric (essentially puck shaped). It also makes our watches instantly recognisable.

At this stage the case back is blank except for the typical watch information: the steel type, model name, serial number and water resistance. On that last point, the Aoraki will have a screw-down crown and case back, giving it a go-anywhere-do-anything 100m water resistance.

Probably the thing I am most excited about with this model is the dials. When most brands launch a new model they do colour variations to create choice. With the Aoraki, we are doing four completely different dial and handset combinations, all in high-contrast velvet black. Markings will be painted in white and indices/Arabics in either BGW9 or X1-C3 SuperLuminova (or a combination of the two). Three of the designs take inspiration from different historic field watch designs, while the forth is our own modern re-interpretation.

Each dial will have a unique hour/min handset, diamond-cut in steel and brushed to align with the case finish. These will be filled with X1-C3 too for maximum night legibility and contrast with the dial.

The small seconds hand will be the same for all variants. I really liked the matte-finished ‘CD rings’ of the Kruger, and we’ll be following the same design language here, albeit with slightly different second markings per variation.

I’ll go more into the design of each dial/handset in a separate post, but for now these are the working titles: Zulu, Vector, Flieger and Milspec. See if you can match the name to the design!

To keep the watch affordable, it will not be available with bracelet, it will come with two zulu style straps. By default, it will come on a leather strap, plus there will be a ribbed nylon for a more military look. Below are some examples of the straps although the hardware and finish might be a little different.

As with all our watches, we’ll be using Viton™ gaskets on the case back (and perhaps even on the crown) for increased long-term durability.

Another Draken first with the Aoraki will be the extremely practical built-in anti-magnetism. The movement will be surrounded by soft metal (Faraday Cage) to reduce the effects of magnetism on the movement (20,000 A/m). This is another reason why we’re going with a solid case back as there will be an extra piece of metal between the movement and case back.

The Aoraki will come on the laser-cut bamboo insert inside our new MOLLE pouch package, with a custom velcro patch on the outside, similar to below:

The prototypes should be ready in December and I want to get them straight out the door again for pro photos.

Reviews will come a little later as I want to put this into production before launching to reduce the lead time between launch and shipping. If there are no major issues with the prototypes, we should be able to launch in April and shipping in May.

Thank you for reading this. Designing and overseeing a production process can often be challenging, and it means a lot to me to know that out there, there are obsessives like me who are willing to put in the time to join me on this journey.

Leave a Reply Cancel reply
Thanks for subscribing!