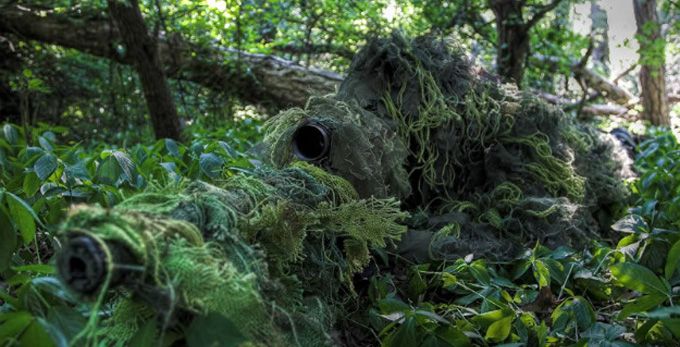 In an effort to talk about more than just watches, we’ll be sharing the occasional post on a random topic we found interesting. This week, we’ll be looking at camouflage.

In nature, camouflage is the oldest trick in the book when it comes to avoiding detection. Some pretty obvious examples are the skins of wild animals such as zebra, giraffe, leopard, tigers. I’m particularly interested in the military, aviation and naval camouflage. Here are some pretty interesting things that you might not know about.

Did you know that the colour khaki was first introduced by the British military in Asia, as an updated uniform from the traditional Red Coats. Sir General Harry Lumsden designed a new uniform using a khaki coloured in 1848. The colour quickly became popular for all colonial forces and was used during the Second Boer War and the Madhist War. The US Army adopted khaki during the Spanish-American War, in 1898. A little while later the Navy and Marine Corps also started using it. Later, in 1902 a more greenish drab was used by the British Empire Armies. This became known as olive drab.

For the upcoming Kalahari, you will be able to choose from Khaki or Olive coloured canvas straps.

Dazzle camouflage, also known as razzle dazzle (in the U.S.) or dazzle painting, was a family of ship camouflage used extensively in World War I, and to a lesser extent in World War II and afterwards. Credited to the British marine artist Norman Wilkinson, though with a rejected prior claim by the zoologist John Graham Kerr, it consisted of complex patterns of geometric shapes in contrasting colours, interrupting and intersecting each other.

In 2002 the Canadian Forces put CADPAT (Canadian Disruptive Pattern) camouflage into use. It was designed to reduce the likelihood of detection by night vision devices. CADPAT is a type of multi-scale camouflage, where a pattern is combined at 2 or more scales and is often created with computer assistance. The idea is that it would provide camouflage over a range of distances.

The first use of multi-scale camouflage dates back to the 1930s when it was experimented with by the Soviet and German armies. Multi-scale camouflages weren’t always effective. The UCP pattern of the US was brought into use in 2004, but it wasn’t field tested against other patterns properly, and its effectiveness was questioned. This led to it being replaced by the OCP (Operational Camouflage Pattern).

Below is a video demonstrating the use of the British Multi-terrain pattern.

These suits which make you look a bit like Chewbacca were originally used by Scottish gamekeepers as a portable hunting blind. They were first used in the military by the British Army during the Second Boer War. In the Australian Army, ghillie suits are called ‘yowies’. A Yowie is a mythical beast similar to the Yeti or Bigfoot, said to be living in the Australian outback.

For a lot of snipers, it is a right of passage to make your own ghillie suit. They are made with either rough burlap flaps or twine, or nylon and other artificial materials.

While military camo does work really well in combat situations, it’s not really suitable for hunting. You may want to look like a bad-ass army guy when hunting, but by wearing military camo you could be adding the unnecessary risk of being misidentified. In New Zealand, almost every year there has been an incident where a hunter has misidentified their target and shot and killed another hunter. For this reason, many hunters wear blue or orange camo.

If we are looking at the actual science of how many game animals see, orange is most likely the best option to be visible to humans, but not the deer.

So, if you are going to wear camo, wear it for the right situations, and obviously – identify your target beyond all doubt. For more details about this type of camo, check out this article.

Posted in:
Blog, Other
Tagged:
army, camo, camouflage, hunting, military
Thanks for subscribing!